Last minute trip to Amsterdam…why not?  Halfway through our stay in Paris we were out late having dinner and drinks in the city.  After coming home to our hotel around 3am we got on the only computer in the hotel lobby and thought it would be a great idea to buy a train ticket to Amsterdam departing at 7am from Gare du Nord.  We had a rough time waking up after 4 hours or so of sleep…. so we were running late.  When we got to the train platform, no one was there and the doors to get on text train were locked.  Needless to say, the train conductor yelled at us and we thought they were not going to let us on the train but alas they felt sorry for the three dumb American girls.  So, we boarded the train and we were on our way to Amsterdam!

We passed out the entire train ride and when we got to Amsterdam I was taken back by how beautiful the city is. The canals and waterways are so romantic and beautiful.  I felt like I was in another world.  We went to the Anne Frank Museum, which was extremely moving, especially when we climbed the hidden stairs behind the bookcase to the attic where Anne Frank, her family and the other families lived during World War II.  While exploring Amsterdam I wore an Anthropologie blazer, a blue dress my sister got when she was teaching English in South Korea, white tights with my go to Steven Madden boots for the trip and a purse from T.J. Maxx my Mom got me for one of my birthdays! 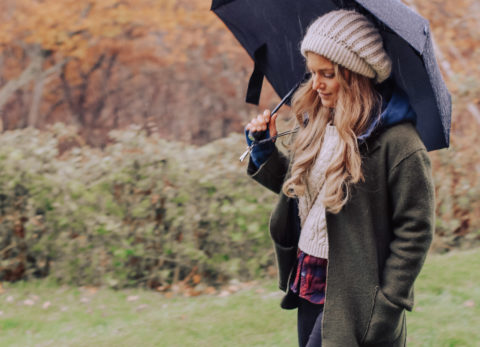