Jeremy and I had an amazing opportunity to visit Nepal with his Uncle Byron, Aunt Cynthia (the aunt and uncle who we visited over Thanksgiving to their vacation home in Ojai, California), sister Molly and his Aunt Cynthia’s best friend Donatella. Jeremy’s family has donated to Mercy Corps, a global non-governmental, humanitarian aid organization for the past 10 years. Mercy Corps specializes in operating in areas that have undergone/are currently undergoing various forms of economic, environmental social and political instabilities. So, Mercy Corps is really making a difference in the world.

We’ve been trying to plan a donors trip with Mercy Corps for the past two years. Last year we were going to travel to Lebanon, but it didn’t end up working out. So, this year we planned far in advance internally with Jeremy’s family and with Mercy Corps to make it happen! So, Nepal ended up working out with timing and logistics! Byron and Cynthia don’t have kids, and own their own company, so they have the flexibility to travel around the world in their spare time. Cynthia is an amazing vacation planner and worked together with Wilderness Travel, an “Adventure Travel” booking agency, to plan our excursions. While we were in Nepal we had a jam packed itinerary to take full advantage of the time we had there.

Getting to Nepal is no easy feat. Our flight itinerary included:

So our flight time was over 24 hours. That did not include any of our layovers. We left Atlanta, Georgia on Friday March 2 and didn’t arrive in Kathmandu, Nepal until March 4. In total we spent ~32+ hours traveling to get to Kathmandu. Luckily we spent the night in Bangkok before taking our final flight to Kathmandu the next day.

We arrived at Dwarika’s Hotel in Kathmandu and ended up just crashing for the night. The 5 star hotel is absolutely stunning, 15 minutes from the Kathmandu airport, and right in the middle of Kathmandu. Many famous people from including Selena Gomez and the Queen of Bhutan (who was there the same time as us) have stayed at this beautiful and historical hotel.

On March 5 we flew from Kathmandu to Pokhara, a town at the base of the Annapurnas. Luckily the flight from Kathmandu to Pokhara was only about an hour. Pokhara is absolutely stunning and where most people start their trek through the Himalayas. We visited March 5 to March  8 and stayed at the Tiger Mountain Pokhara Lodge, an exclusive retreat set on a spectacular hilltop ridge a thousand feet above the Pokhara Valley. While staying in Pokhara we enjoyed the magnificent panoramic views of the Annapurna skyline, which you can see in the photos above. The skyline included the fish-tailed peak of Machapuchare and three of the world’s 8,000-meter Himalayan peaks: Dhaulagiri, Annapurna, and Manaslu. For all our meals we would sit outside and enjoy this breathtaking view.

For the next couple of days we enjoyed various activities at the Tiger Mountain Pokhara Lodge. We took guided hikes around the area, explored farmlands, valleys, and villages. On one of our hikes we came across a Hindu wedding and the women invited Molly and I to dance in the wedding. I’m a horrible dancer, but Molly and I were great sports about it, and she ended up being pretty good. The women told me, “at least you’re pretty.” Oh my god I was so embarrassed but they were so sweet about it!

Another day Jeremy and Molly forced me into paragliding off a Pokhara cliff. I am terrified of heights. Falling to my death is my absolute nightmare, but I also didn’t want to be the only pansy who didn’t go. So I faced my fears and jumped off a cliff with my guide. I’m not going to lie – it was amazing but also extremely terrifying at the same time. I was gliding in the air with the birds! I only did it for 30 minutes, but Jeremy and Molly extended to 1 hour. Even though that was something extremely out of my comfort zone, I think I would do it again. One of our last days Jeremy and I enjoyed couple’s spa treatments. On our departure day back to Kathmandu, we booked a flight first thing in the morning to visit Mount Everest, but the weather was cloudy and unsafe to take off. We were really bummed, but I do value my life. 🙂

On March 9 we made our trip back to Kathmandu from Pokhara to stay the next couple of days at Dwarika’s Hotel and visited with Mercy Corps. Mercy Corps has an “Emerging Leaders Program” (“ELP”). High-performing Mercy Corps employees from various parts of the world are encouraged to apply. 30 to 40 applicants are chosen to participate in the program, which is a 2 week “mini MBA”. Professors from Portland State University fly in wherever the ELP is held. This year the ELP was held in Kathmandu. So, for two days we met the Mercy Corps leaders, the Mercy Corps ELP participants and the Portland State University Professors. We got to experience how impactful this program is and learn about what all of these Mercy Corps employees are doing in their respective parts of the world. Honestly, listening to what these men and women do in their countries was a life changing experience.

Then, after spending a few days with the ELP, we traveled with Mercy Corps to remote villages around Nepal for site visits. First we visited a village impacted by the 2015 earthquake. The April 2015 8 magnitude earthquake killed nearly 9,000 people and injured nearly 22,000. The mayor of the town explained how Mercy Corps was one of the first aid organizations on the ground to assist after the disastrous earthquake. Mercy Corps is still helping to build new homes for the villagers/families impacted.

Then, we visited a remote village that received a refrigerator from Mercy Corps. With the refrigerator the villagers are able to keep their milk colder longer to sell in the markets. The majority of the Nepalese population are Hindu, so cows are sacred, and so do not eat them. However, they sell the milk. I cannot even fathom not owning a refrigerator, but the villagers were so proud that we came and they could show off how they could keep the milk cold.

Our next site visit was to see a new, sturdy barn that keep the cows safe. Most of the structures in remote parts of Nepal are not sturdy. It actually ended up storming after we arrived and the cows were just chilling, but our Mercy Corps guides made us evacuate for our own safety. Roads can get really dangerous with mudslides in the rain. However, we made it back to our hotel safely.

Then, our last visit was to a women’s cooperative, where women in a remote village can take out loans to start their own business. This was my favorite Mercy Corps site visit. Traveling to Nepal with Jeremy’s family was a life changing experience and I’m so grateful I was able to attend. It made me really appreciate everything I have in my life including my education, career and life experiences. ‘

After Nepal, Jeremy and I took some time to relax in Koh Samui, Thailand. I’ll recap that in my next La Vie Petite post! 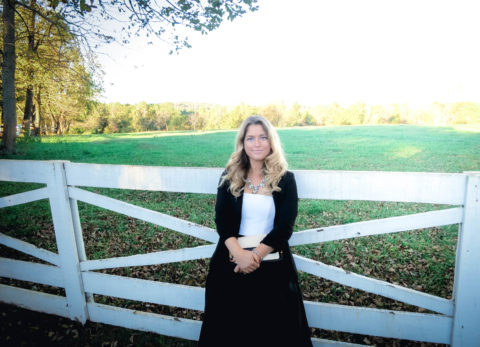 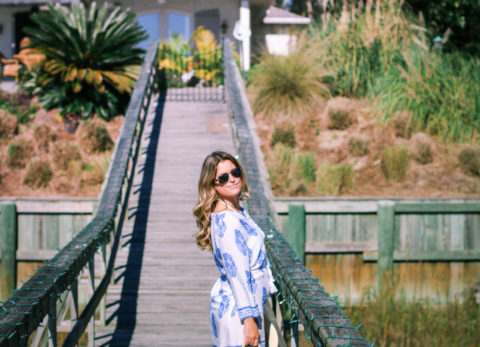